Two weekends back, I was in NYC for yet another concert, this time to see the fantastic Mayer Hawthorne, the fabulous Sharon Jones and the Dap Kings, and legends Hall & Oates at Madison Square Garden. Such a fun show.  I had reserved a room at the Holiday Inn a couple blocks from the venue and a few minutes’ walk from the Vamoose bus stop.  Times Square is only about a 20 minute walk.  I’d stayed at the hotel before so I knew it was decent, and it just made sense to stay there in light of how convenient it was.  (Also, free breakfast!)

My Vamoose bus got in around 1:30 and I went to the hotel to drop my stuff before getting a late lunch/early dinner at Haymaker, a great restaurant just next door to the hotel.  The burger was great and the beer menu was excellent.  Cool space, great atmosphere. Didn’t expect to find a place like that in that part of town, but glad I did and that it was so convenient.  I think it had only been open a few months.  Definitely worth checking out if you’re in that part of NYC.  Before the concert, I walked to Ayza for hot chocolate and dessert.  The hot chocolate was delicious, but I thought the dessert was a bit overpriced for what it was.  Also, I practically had to stare down the staff to help me even though I was sitting at the bar.

Saturday morning I was up early.  I had actually booked a room for that night at the 70 Park Avenue, so I schlepped my way over there, dropped off my bag, and headed out again. I had made plans to see a matinee of Aladdin on Broadway and had a few hours to kill.  You may remember that I saw the Star Wars:  The Power of Costume exhibit in Seattle last May; well, I saw it again in NYC at Discovery Times Square.  I was excited to find that there were even more costumes this time, and not just additions from The Force Awakens.  There were some parts of the exhibit where the staging was fantastic (a mirrored room creating the illusion of a clone army, the background from Padme and Anakin’s wedding), but the lighting wasn’t always great and I’m pretty sure there were signs that did not sync up with the costumes on display.  But overall, I was still glad I went. 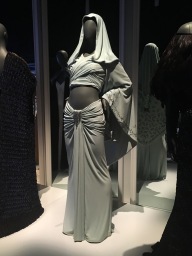 I loved this dress too. Wish the color had come out better; it’s a pretty blue color.

I sought sage words from Yoda. 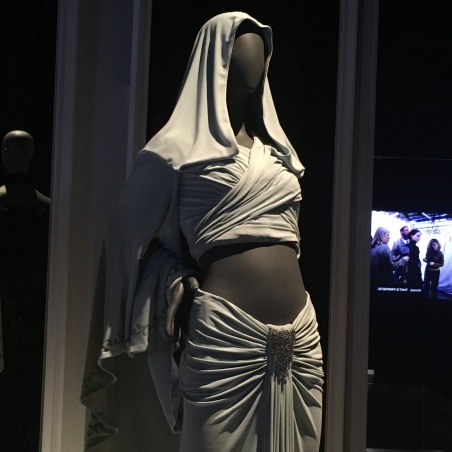 I still had time to kill after wandering through the exhibit (since I’d seen most of the costumes already, there were only a few where I lingered) and figured I should get lunch before the show.  I wanted a relatively authentic New York experience, but where are you going to find something like that in Times Square?  I walked a block over (the theatre wasn’t far from Discovery, so I didn’t see a point in going too far away) and found yet more chains and places with mediocre reviews.  But I stopped short when I saw reviews for a nearby pizza place called 2 Bros with fantastic reviews and cheap pizza.  A giant slice of tasty pizza and a bottle of water for $3.50?  Practically unheard of.

The theatre opened at 1, so I took my seat, glad to have a chance to sit after walking all morning.  Aladdin was great, with new songs and a few changes from the movie, although as expected, Genie is just as much of a show-stopper here.  The pop culture references have been updated to reflect current memes (Genie says “Ain’t nobody got time for that” and does the Whip and Nae Nae).  The show was lots of fun, but I still like the movie better, and not just because no one could ever beat Robin Williams.

On this trip, I had also pledged that I would attempt to find the memorial near the late David Bowie’s apartment in SoHo.  I’m not sure how close I was to where he had lived (the memorial was probably long gone anyway), but I found the studio called The Magic Shop where his final two albums The Next Day and ★ were recorded; it apparently wasn’t far from his apartment, so I can’t have been too far off.  I was sad to read that the studio will be closing this month; it made me wish I had been bold enough to buzz the door to see if someone would give me a tour.

I sauntered around SoHo a little more until I ended up across the street from the famous Apple store (another place I’d been before).  I was thinking about dinner and I figured SoHo would have far more options than the area around my hotel.  Just after recognizing the Apple store, I saw there was a food truck with empanadas outside.  (This was my train of thought:  “Oh there’s that Apple store I went to that one time OH S*&^ THERE ARE EMPANADAS.”)  I found yet another place to get dessert and hot chocolate, Jacques Torres, before getting back on the subway back toward the hotel.

The 70 Park Ave is a Kimpton property, and if you are a member of their Kimpton Karma rewards program, you get a credit to use at the bar or to raid the minibar.  This one was $15; I think outside of NYC, it’s $10.  Either way, free stuff just for being part of the program!  Who says no to that?  I treated myself to a drink and a snack at the bar (the credit only covered the drink).  The room itself was fabulous; I wish I had taken a picture. Even though the hotel was off the beaten path for me, a bit more expensive than the Holiday Inn room, and there wasn’t much of interest around it, I would consider staying there again just because I liked it so much.

It was yet another good, full-to-the-brim trip to New York (but still no Umami Burger). My overall impression of the city hasn’t improved:  It’s dirty; it’s full of tourists and ways to leach money from you; I tired of hearing car horns within a few hours of arriving.  But it still unfailingly provides you with new adventures even when retreading old ground.