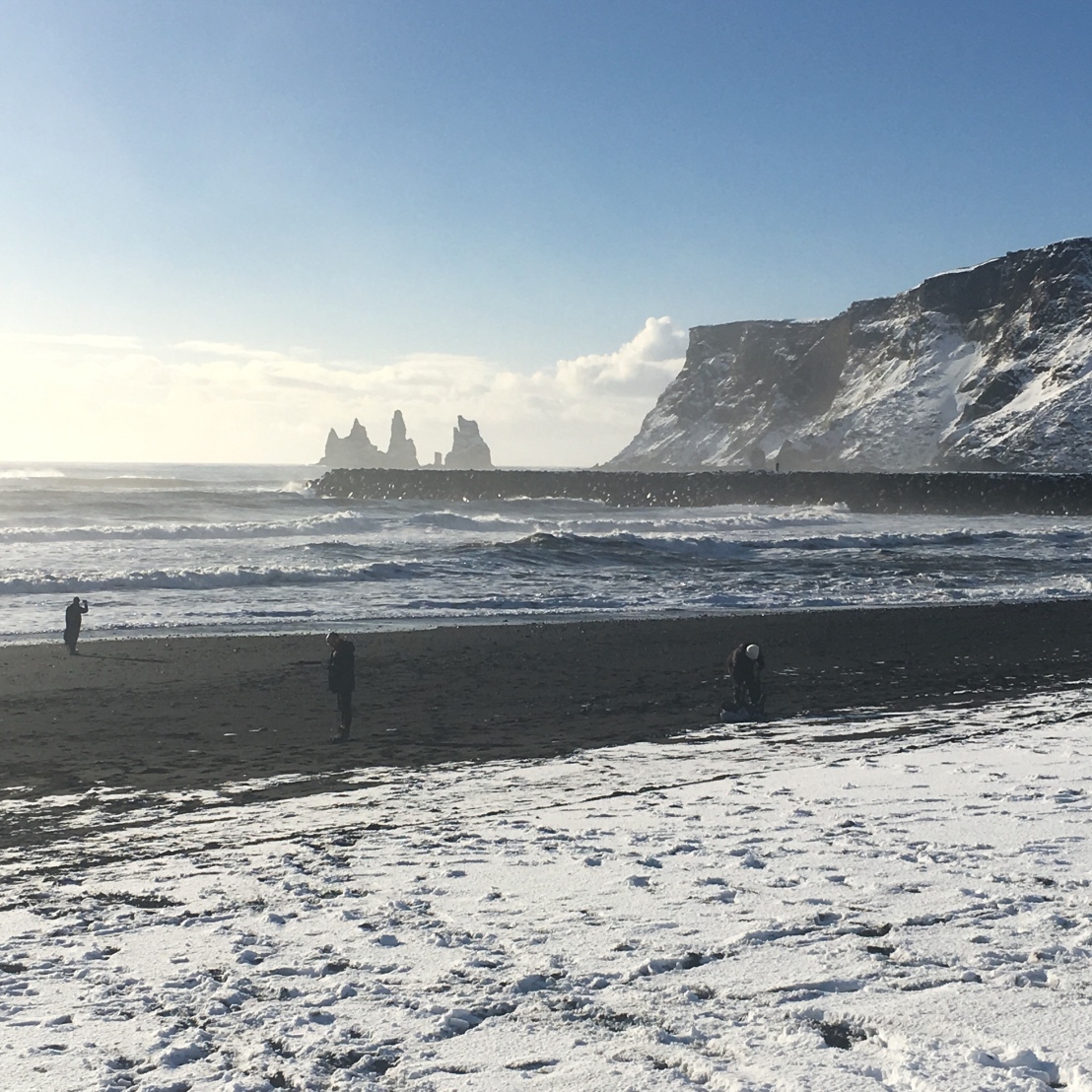 Be ready, but don’t worry

We were lucky enough to be led by the same fabulous tour guide, Sif, for two days.  She told us Icelanders are pretty optimistic people who tend not to worry about the probability of sooner-rather-than-later life-altering seismic and volcanic activity.  In telling us about the stunningly beautiful coastal village of Vìk, Sif said nearby Katla was the volcano that most worried seismologists.  The volcano has a history of exploding twice a century; however, the last eruption was in 1918.  The town has beautiful black sand beaches with millions of pebbles and stones smoothed by the crazed, dangerous surf.  But that surf is causing the beach to suffer terrible erosion.  Even though Katla will cause substantial damage when it erupts, its eruption would bring much-needed silt to fill in the beach.  The town practices evacuation drills twice a year.  In a way, the biggest worry is flooding; a glacier sits on top of the volcano, and the torrential meltwater flooding would require the town to find higher ground.

Maybe Icelanders are so optimistic because they know that good can come from destruction.  Sif told us that for three years after the 2010 eruption of Eyjafjallajökull, the farmers didn’t have to fertilize because the soil was so mineral-rich.  The crops grew so fast, they couldn’t all be harvested.  Nature continued to give even after it had taken away.

Sif also mentioned that even though the news coverage of the volcano didn’t talk about how the locals were affected, because Iceland dominated the news, people became curious to visit.  Tourism has increased tenfold in recent years, bringing much-needed money to a country whose currency was basically worthless ten years ago.  A few years ago, only about 300,000 people would visit; this year, they expect 3.3 million tourists, ten times more people than live in the country.  (It’s worth noting that English is very widely spoken; Julia, a wonderful woman who worked at the front desk at our hotel, had come from Ukraine to Iceland to learn English and managed to pick up Icelandic as well.)  There were cranes and construction all over downtown Reykjavik, especially near the gorgeous Harpa concert hall on the waterfront, where a Marriott is being built next door (Sif was concerned that it would take away from the hall’s beauty).  A cab driver complained that there were too few hotel rooms, creating a huge market for AirBNB.  Both he and Sif noted that finding a place to live in the city was difficult and pricey in a country already known for being one of the world’s most expensive places.

Be patient and go with the flow

Icelandic has 1800 words just to describe the country’s volatile weather.  Sif told us that the weather forecasts are unreliable more than an hour in advance.  As our tour van traveled along on Friday, we saw heavy rain turn to heavy snow, which gave way to sun–all in the span of maybe an hour.  Later that day at Þingvellir National Park, where you can see the North American and Eurasian tectonic plates meet and explore the meeting place of the world’s longest-running Parliament dating back to 930 AD, we saw it snow while the sun was out.  On Saturday, we were caught in an unexpected snowstorm as we visited the famous waterfall Skogafoss.  By the time we traveled to Vìk, the sun was out, and we managed to dodge another bullet as a large, ominous cloud ahead dissipated.  With the snow on the black beach, there could not have been a better time to appreciate the scenery.

The weather and ever-present threat of danger and change to the landscape contribute to the character of Iceland and the resilience of its people.  It’s a fascinating, beautiful country that I plan to explore more of someday.